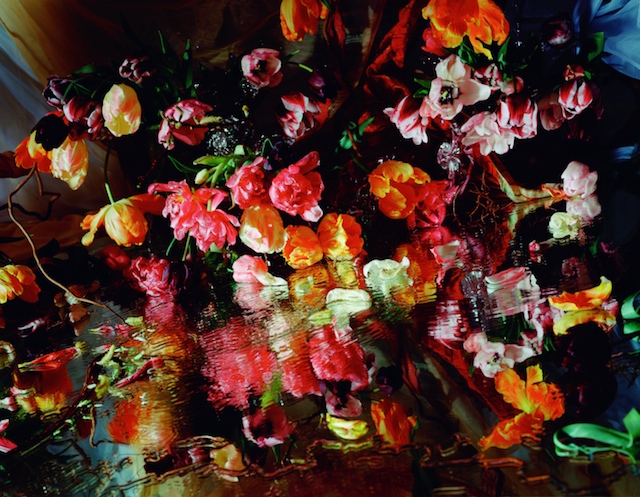 Using huge mirrors, elaborate glass vases, rich draperies and full-blown cut blooms, her seductive images seem closer to painting than photography. Smulders hasn't always taken photographs of snaking tendrils  tumbling out of grotesque and beautiful objects. In the early 1990’s she was well known as a portrait photographer, using herself as a model for her distinctive family portraits. Instead of replicating idyllic images of parents and children, she photographed moments when things were far from perfect. In Maternité IX her children are crying rather than smiling at the camera, and a sense of theatre is emphasised by the blue velvet curtains draped around this subversive scene. Smulders covered her miniature sets with chintz wallpaper and hung assorted limp undergarments to frame her contemporary Madonnas. Playing unhappy families inside what look like grown-up dolls houses paintd sickly sweet ice cream colours suggested that commercial (or even private) images of family life are often ‘unnatural’ and even deceptive. It was hard to tell whether her version of domesticity was meant to seem oppressive or whether she was just alerting the viewer to the complex experience of being a mother, wife and artist. However, there were incipient signs of her current interest in flowers even in these mini domestic theatres.

In 1996 she started photographing still lifes. Her single stemmed flowers in old vases were tender anthropomorphic portraits in front of sky-blue backgrounds and Smulders still has her collection of pretty china on top of her rose wallpaper-lined cupboard. However, these single blooms soon evolved into the extraordinary concoctions she produces now. In some ways, the domestic theme has become deeper and more resonant, in that she often refers to Greek myths, many of which are replete with instances of fratricide and revenge. Instead of depicting potential intense emotion in the modern family, in images such as Nausicaa and Demeter she refers to ancient tales of love, rivalry, jealousy and bloodshed using abstract imagery.

Her recent series of irises in the series Drunkenness is typical of her current approach.Although these are still images, they appear to be moving, especially the areas where ripples of water reflect the crumpled petals above.  The effect is like looking into a clear pond, where rivulets of pure water descend from glacial protrusions. Not all of the flowers are immaculate or in pristine condition, suggesting that something potentially nasty could take place and that if we gazed like Narcissus into these deep pools, we may encounter something unpleasant and engulfing. Smulders’ images are like visual oxymorons, capturing both the effect of movement and stillness, disorder and formality, still life and landscape in a single frame. In Tulipomania, it seems as if she has shot flowers from a gun which have then been suspended in mid air before they reach their target. The impression of a high-speed ejection of a cornucopia of blossoms in this panoramic photographed is extraordinary. These flowers have rejected their familiar celebratory or consolatory roles at weddings, birthdays and funerals and it's almost as if Smulders' blooms have become wayward and violent, acquiring a life of their own beyond our control.

There is something entrancing and almost immoral about Smulders’ work, perhaps because we are invited to abandon the competent, rational part of ourselves to imagine ourselves inside her voluptuous scenarios. In images such as Bloody Tulips Smulders sees her work crossing a boundary beyond decency and respectability.  Recently she has begun to include small insects in her photographs and combined with drops of blood red juice on pallid blooms, they become slightly sinister.

One reason why her images may be so revered in The Netherlands is because her work continues a tradition of still life painting that reached its climax in the 17th Century. Living in the southern half of The Netherlands, where people are considered to be less severe than their northern neighbours, Smulders’ images celebrate a visual eroticism.  400 years ago, however, images of flowers played a different role. They were not only expensive and beautiful exquisite objects to hang in grand canal houses, but also reminders of human mortality. Flowers symbolised an image of perfection that couldn't last and such transient moments were captured by painters such as Rachel Ruysch. These images told the viewer that life is precarious, and virtue was to be prized.

Margriet Smulders agrees that her work acknowledges the Dutch Golden Age of painting but her photographs are not intended as Memento Mori, exhorting us to behave well. Her images are insistently about life rather than death, and their unruly fecundity is what makes them compelling. Smulders wants the viewer to abandon themselves in looking, and like Baudelaire she wants her work to insist that 'you always have to be drunk'. She says; 'You can look for ages at these photographs, really wander as if in a landscape because there's always more to see, they suck you in'.

Like a new lover, these images offer the potential of something astounding about to happen, experiences that you've always longed for. Paradoxically, they also arouse desire that can never be consummated. They almost turn the eye into an organ that could taste and gorge on these delicious images. But the eye can’t lick or chew, so we can never get enough of these velvety, purple irises, the ragged orange tulips and crumpled lips of full-blown petals. Smulders’ potent images are full of potential for imagining ourselves into these seductive landscapes. We could get lost; there is so much to see. They must be seen in the flesh, however, to know how beguiling they really are. But beware; they are perilous because looking at images so beautiful makes it hard to walk away. How can we part from these gorgeous things, abandoning them to their succulent excesses?