To charge into the thicket of some seven-hundred-plus years of perspectival art history without getting caught in the bear trap of sentimentality requires nimble footing and a sure knowledge of the distinction between homage and cliché. Dutch photographer Margriet Smulders accomplished that feat in Botanicals Mirabilis, an abbreviated survey of larger-than-life floral photography at Hagedorn Gallery in Atlanta’s Buckhead district. Smulders’ show comprised nine images made over the last decade that explored ebullient color, explosive composition, and an animating eroticism that throbbed just below the surface. 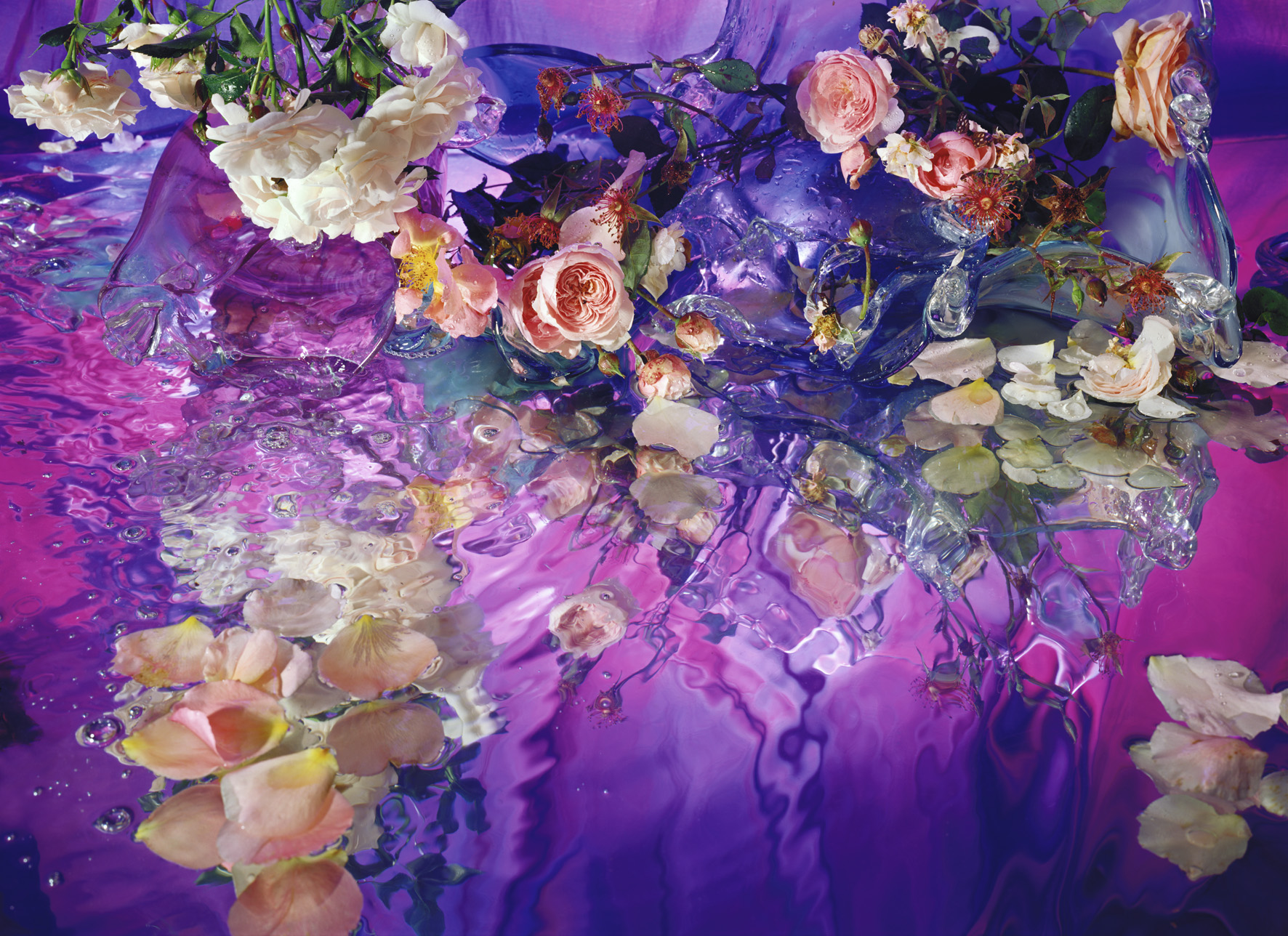 Lilila, 2005, was a case in point. Pink and white fully bloomed roses kissed with dabs of crimson and lemon yellows seemed to tumble from everywhere at once — a disorienting array of loose petals, leafy stems, and glimpses of a barely visible, transparent, glass vase. The entire composition was asymmetrically mirrored in a rippling pool of water suffused with a brilliant light that shaded from deep indigos to purple hues to lilac. The reflections were broken and faceted, suggesting the kind of frozen, instantaneous moment that was the obsession of Baroque painters. Think of Holofernes’ blood ejaculating from his neck as Judith beheads him in Caravaggio’s late-sixteenth-century painting. Time is compressed to its narrowest expression. The reference to Baroque painting is not accidental. Smulders has looked to the Dutch Golden Age painters of the seventeenth and eighteenth centuries as well as to Renaissance models throughout her career as both a portrait photographer and a photographer of dynamic still lifes.

Other works in the show hewed closer to their Dutch models. Since We Have Met Anew, 2008, for example, echoed the disciplined palette of Rachel Ruysch with pops of saffron yellow and magenta against a curtain of dark shadow. But Smulders has not simply reproduced her historical models. Although she shares the same obsession for the precise rendering of detail (the prints were immaculate), Smulders reinterprets the tradition she references. The works in Botanicals Mirabilis made a place for post-modernity: they pulled the flowers from their vases and sprayed them across the planar face of the photograph. Smulders replaced the Baroque painting as-window with the modern day image-as-surface. The picture does not reveal the world; the picture itself is the world; a self-contained system with its own physics and laws of optics.

Those are the conditions under which eroticism and fantasy reach their full flower, of course. The brighter works in particular — Electra, 2001, with its cyans and fuchsias; Lupinelure, 2004, with its rainbow of jewel tones — recalled the splendor of the Folies Bergère, James Bidgood’s homoerotic, phosphorescent landscapes, and Pierre et Gilles’ unrestrained luminosity.

Baroque painting emerged when the material world was separating from the spiritual one. Suddenly, the material world of real textures, colors, and light became more important to European painters than it had been for centuries. Smulders raises the stakes and shows that materialism brought into the modern world need not lead to nihilism on the one hand, nor to nostalgic wish fulfillment on the other. There is a third option: that the stuff of this world may already be divine.