University of Nijmegen in 75 portraits 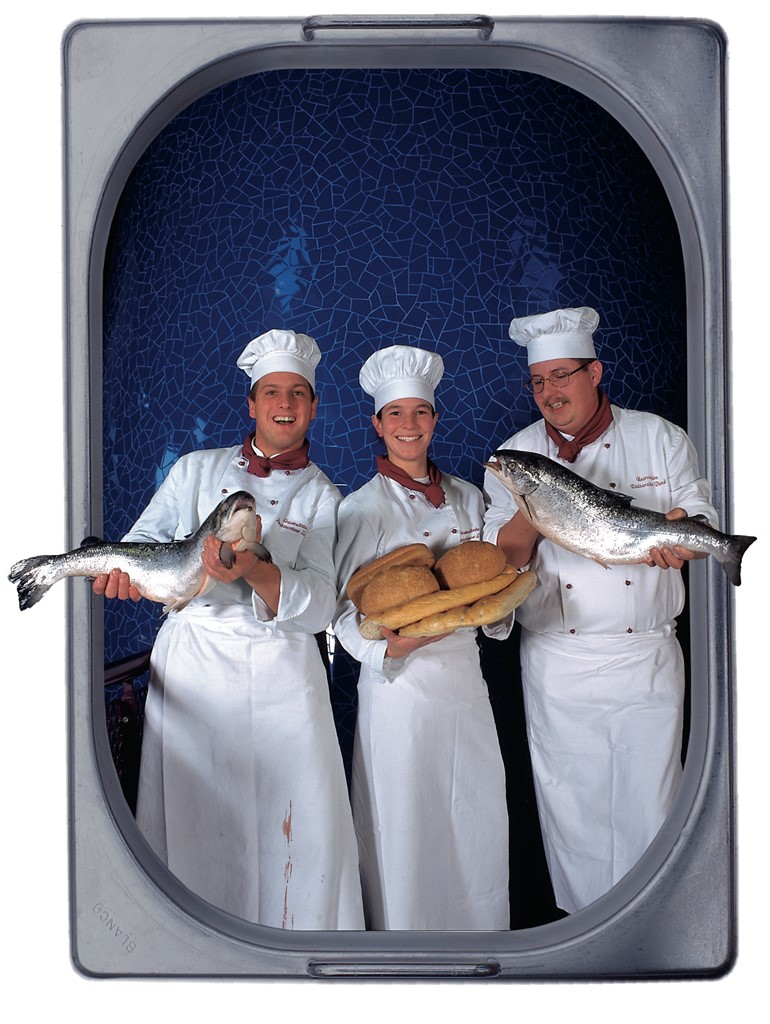 It is 1997. A year before the then Katholieke Universiteit Nijmegen celebrated its 75th
anniversary, the first of a series of 75 images by Margriet Smulders were published in
the university magazine. As a group these images were intended to present a face of the
university.
Even now they still adorn the wall of its buildings, like in the Rafter, the restaurant of
Radboud Universiteit as it is now known. Who ever get served with a warm meal, sees in
between the vegetarian and the daily menu the photograph in which three cooks holding
in their hands two fish and five loaves. The photograph is framed with the edge of those
stainless steel trays in which food is kept warm.

Do the cooks have any idea why they are holding just two fish and five loaves in
their hands? It is hard to tell. They are clearly enjoying themselves, that’s for sure. One
of them might have made the suggestion to be photographed with a fine slab of meat
instead. Also fruit, it colours so nicely and would make it more lush. The artist, though,
stuck to her original plan, and my did it worked out well.

Naturally, Margriet Smulders stuck to her plan. As no other she orchestrates
everything you see in her images. The unexpected is excluded as much as possible
whether it is in her series of Maternité or after that, in her colourful as well as sensuous
flower compositions. For these works she mounted a raised edge to a mirror so as to run
water through it which reinforced even more the hallucinatory effect of the images. It also
shows how much she wants to be in control. During the photo shoots she also had her
assistants entice the fish in the right direction as allowing them to swim as nature
dictates would have ruined the composition.

So, no doubt these five loaves and two fish do have meaning. In her search for
the face of the Katholieke Universiteit Nijmegen she could not, or would not, get around
the university’s own identity. Not the identity as established in the statutes in the Student
Chapel or in the Department of Theology which could have been captured
unambiguously, but one caught in passing, with just a quiet reference. At least, for those
in the know.

Consequently, she made a fabulous picture of the animal caretaker on a farm in

Overasselt, the outbuilding of the University Central Veterinary lab. Against this
backdrop a line of bare trees are fixed in a classical golden frame that intensifies autumn
shades, an animal caretaker stares at the sheep he carries on his shoulders, its legs
clamped in front of his chest. This goes beyond just a portrayal of an animal caretaker.
Here is the good shepherd who guards his flock because every sheep counts. Like
Jesus who in the tenth chapter of John says: I am the good shepherd, and know my
sheep, and am known of mine. As the Father knoweth me, even so know I the Father:
and I lay down my life for the sheep. And other sheep I have, which are not of this fold:
them also I must bring, and they shall hear my voice; and there shall be one fold, and
one shepherd.*)

This picture breathes this atmosphere in every way. The sheep appears
completely at ease. From the look on the caretaker’s face it is clear that he knows this
sheep. The comfort of the gospel is no less relevant to Christians in this time of divergent
individualisation and globalisation.

The image of the three cooks, five loaves and two fish directly refers to a story
in the bible as well. Being tired Jesus retreats in solitude. It remains a mystery how the
crowd knows, but they are waiting for Him when he arrives. They hope He will heal their
sick. As evening approaches the disciples try sending them away for it has been a long

day and they still had not eaten. However, Jesus wants to stay there and feed the crowd
as well. But how ask his disciples, if we put everything together we only have five loaves
and two fish. Serve them round says Jesus. And then a miracle occurs. The supply of
bread and fish does not seem to end. After the crowd had eaten to its satisfaction, twelve
baskets full of fish and bread pieces could still be picked up. There had been about five
thousand men, women and children notwithstanding.
In the same way we wonder in which universe the cooks they have been portrayed. The
same applies to the animal caretaker. Is he aware that his portrait is not that simple and
that he figures in a higher order? In this case the order of Smulders’, to coin a phrase,
who for that matter also reigns as a deity over her own creations. It is tempting to put the
question on a more fundamental level. Are we in principle, capable of acknowledging
thus denying whether we are part of a higher order?
Back to Smulders’ universe. Does it matter if the subjects see through this game of
allusions? Would the cooks still have laughed as much? Would the animal caretaker still
have carried the sheep on his shoulder? To put it differently. Does the identity of the
university really come through these pictures? Did the persons in the photographs
realise they would be representing the university’s identity through their pose. If they
had, the cooks might not have laughed at all and the animal caretaker might not have
hoisted the sheep onto his shoulders. Yet, once having consented to be photographed it
does not matter if the cooks and the animal caretaker had known in which story they
were going to play a role. Since being framed and put out of context, they would have
been included in whichever story anyway. Certainly in the one that Smulders wants to
tell but also in the onlooker’s story. However much Smulders likes to be in control of her
images, from the moment they are exposed she loses her grip on them when it comes to
allocating meaning and definitions. Which meaning we pin on these images depends on
our position, knowledge and background but it is rarely an intrinsic feature of the object
itself. Margriet Smulders has me privileged. However, not for my sake. I just happen to
hang on to a set of ideas in which the images she portrays have meaning for me. Having
been raised a protestant, I recognise the image of the two fish and five loaves. Those
brought up as catholics go probably a step further and see in the three cooks two men
and a woman representing the Holy Family of Joseph, Mary and Jesus.
We may assume that Smulders aimed to capture the identity of the university by using a
series of images. However, is that which Smulders attaches to the university really its
proper identity? If we conclude that Smulders reigns over her own universe then the
question of where that universe ends is a valid one. Is it at the staging of her
photographs? Or is the identity she attributes to the university also a construction that
only exists within her own universe or also to ours?
If we allow Radboud University to speak for itself it turns out that Smulders did touch its
heartstrings. The motto driven by quality, aimed at the future gives as its mission:
Radboud University emerged from the Dutch Catholic community en is rooted in a rich
Catholic tradition. Its conviction is of being strongly connected with the Christian
philosophy of life. Of course, the question is if this is also felt by the current students and
staff members that make up this institution. A question put like this can easily be denied.
Hence, the conclusion might be that Smulders did capture the university’s identity

appropriately, even though that identity is mainly a formal one. Furthermore, she wrongly
gives the impression that the university community actually supports this identity
unanimously, precisely through the use of common staff members as symbols for
representing this identity.

However, we do not get off that easily. The preceding text to the passage we
quoted earlier on concerning its mission says: The identity of the university is formed by
that which binds its community. In all its simplicity it is a beautiful line with rich
implications. The members of the university community may differ when it comes to
valuing the origins and the formation of the university. However, concerning identity it is
not our differences but our similarities that count, that is, what we have in common. The
similarities the university community shares are not self-evident. Not even in a literally
sense. Words are not always sufficient to express this kinship. This is a problem
because these similarities need to be articulated time and again in open dialogue.
However, as words fail, we need also images and symbols. Smulders casually reminds
us of this with her series of 75 portraits. In these works she interweaves portrayals,
compositions and icons from art and cultural history without violating the image. We can
imagine her delight as she drew on that history so as to suffuse extra layers of meaning
into these images. For those in the know. And in a sense to reward knowledge. In what
better way could you honour an institution?
Johan van de Woestijne
*) King James, St John 10:14