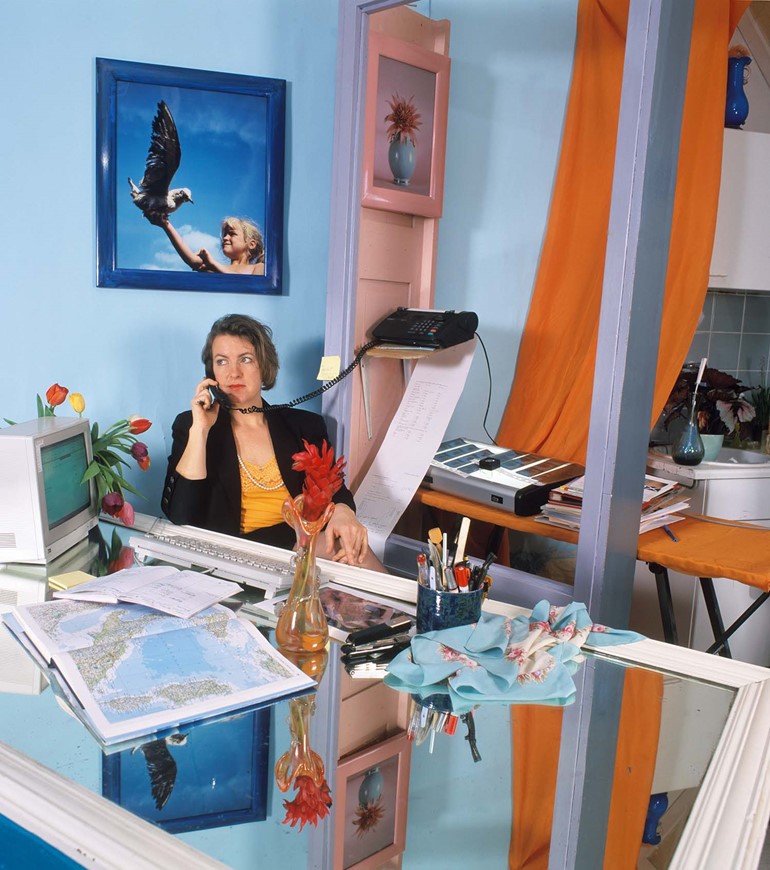 In the series The artist working we see in the fourth scene this intriguing photograph of the manager. The manager is on the phone in the office. It is the fourth take in a series of five that are preceded by shots entitled the photographer, the flower market, the ironer and a family affair. The series portrays the various aspects of the working life of the artist. It can be seen as a representation of multiple identities whose social and cultural accomplishments are not fixed but fluid and interwoven with the social world around them. The series exemplifies this relation with the social world as it makes a firm statement about how life and work are inextricably linked and not the neatly disparate domains that are often assumed. Margriet Smulders plays with the boundaries between work and life including her children, who miss her motherly attention in the photographer and who enjoy assisting her in a family affair. In modern Western societies clearly children belong in the private sphere of family life and the home and there is no place for them in the public sphere of the workplace. Bringing children to work is not acceptable in most professions and so by allowing them a space at work and making them part of the artistic process is a refreshing way to disturb the seemingly orderly separation of private and public life.

The domain of the manager does not lend itself very well to blurring boundaries between life and work. This is the place for work and for work alone. There is only room for one child left, and that child is confined to a still picture on the wall with arms held up to a big bird that has its wings spread. The picture breaths a longing for freedom and the possibility to spread one’s own wings. In contrast, the manager cannot spread her own wings as she is tied to a desk by a telephone cable. The manager is very businesslike and there are a lot of clues that underline this image. All of the paraphernalia of business and her attire from the computer, fax machine, maps and yellow post-it notes to her groomed and permed hair, her pearl necklace and business jacket attest to this. The emphasis on business gear does not conceal that the managerial aspect of the artist’s working life is not an easy nor necessarily an enjoyable one. The artist as a manager initially may seem contradictory however the connotation of  manager is very different to that of artist. The planned and orderly schedule of the manager clashes with the creative free spirit of the artist. Though the differences between the professions should not be exaggerated as managers and artists both have communication as a core task however a less romanticised notion of the working artist would also recognise the need to manage in order to make a decent living from art.

There is more to this photo than a conflict between the artist and the manager. What we see here is a woman and female managers are a different breed. Although their numbers are slowly rising, women still are a minority in the managerial profession. The issue of women in management is a popular topic that easily brings on heated debates at dinner tables, academic journals, and board meetings alike. Two questions dominate these debates. Why are there so few women in top management positions? And do men and women differ in terms of leadership qualities and management style? These questions do not only pertain to the managers, but also to artists. Why are there so few top female artists? And do they  create different kinds of art than their male counterparts? Could women add a new perspective to art? These questions are similar in various professional fields and especially salient in those professions in which the sex ratio is skewed. In her self-portrait of the manager, Margriet Smulders shows the complexity of their position and the ambivalence that female managers are faced with because they are rarely regarded as proper professionals. The desk in the photo is a mirror, but there is no reflection of either artist or manager.
There are several possible reasons for the issue of scarcity of female professionals. Optimists say that it is a matter of time and that women traditionally have lacked the education and experience to fulfil management positions. They should nów that they are graduating from relevant educational programmes. This is a non sequitur and it is popular because it offers a simple explanation that does not acknowledge the difficult process of discrimination. Further, it also discards statistics that prove that female students have been graduating for decades with flying colours in all sorts of disciplines without being absorbed into management ranks. It is a fallacious argument and viewing the process as if it were a pipeline, it is a leaky one and it is systematically leaking female talent. As Virgina Valian said it is as if that pipeline has woman-shaped holes in it.
Another explanation points to women’s choices in life and work. This explanation is especially popular among men who make decisions about hiring to management positions. Women could not be interested in a managerial career and should settle for less challenging professions in order to be able to combine paid work with care responsibilities. They could not possibly want the challenges, the long hours and the big salaries that come with these top positions. It is often assumed that there are little or no women with the proper qualifications and if there were any, they would not want the position because they fear the responsibilities that go with top management functions. The assertions of this nit-picking on individual choice have met with a lot of criticism. The influence of structural and contextual constraints on individual choices and preferences of women in general is negated. Choices are never made in the abstract since they are dependent on heterogeneous opportunities, support and social conditions. The social sphere has a profound impact on women’s choices and should be taken into account in every discussion on this issue. Furthermore, the variety in women’s choices is neglected as well. It goes without saying that there are women who do aspire to a career in management, willing to take on the challenging tasks, make the long hours and who do covet the generous salary. So the choices are not what is holding them back from top positions. Nevertheless, they are being held back since the number of those who are willing are much larger than those who actually work in management. The aspirations of these women rarely feature in the debate that tends to put the spotlight on another group of women who work part-time jobs. Even though they may be the larger group, the emphasis on this group over stresses gender differences while disregarding the similarities. In other words definitions, norms and expectations about masculinity and femininity influence the debate that focusses on choices of women, leaving those of men undisclosed.

Which brings us to the third explanation of the small numbers that highlight the role of organisational cultures and the standards concerning management qualities in those cultures. The vast majority of managers are still and have always been male. This has determined the extent to which leadership and management is perceived as a masculine characteristic. Men’s patterns of behaviour have set the standard for managers who are associated with goal-rationality, authority, assertiveness and resilience to name but a few stereotypes. The definition of managerial qualities is one that favours those characteristics that are stereotypically associated with men. There also has been a component in leadership and management that refers to qualities such as emotional maturity, social support, communicative skills and a participatory style that are generally associated with femininity. However, the masculine tends to supersede the feminine. This does not make it easy for female managers. As members of a minority they are expected to acquire a managerial style that is invented by and for men. When they do display any authoritative, tough and assertive behaviour, they face social sanctions for  violating the rules and expectations of feminine behaviour. If however, they do not display sufficient male managerial qualities while being supportive and communicative and involving others in their decision making, their abilities to do the job are questioned. Whatever contribution women make as managers, they often have to prove their abilities and it is rather like having to navigate between the Scylla of not being professional enough and the Charybdis of not being feminine enough.

Few areas are more prone to stereotypical perceptions of women than the issue of women in management. The female manager on the phone is part of that larger story and might be contemplating the actions that is required of her. Fortunately, she has multiple professional identities to draw on and will be able to implement her creativity to resist and subvert those stereotypes. With the atlas opened up in front of her, she could steer her business in any direction she wants. She might even be listening to whoever is on the phone while envisioning future ventures and can choose her course of action. She furthermore even manages this business featuring colourful flowers and soft fabrics in beautiful and imaginative compositions.