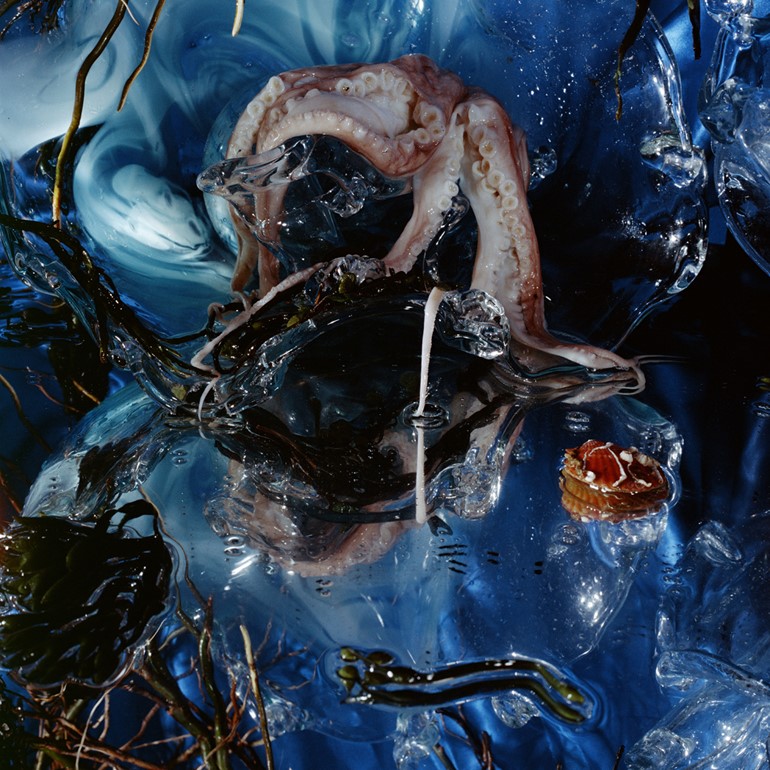 The mystery of the world is the visible

The first octopus I ever saw flew through the air. This is rather unusual for octopuses, it
was clamped to the hand of a fisherman and arrived a few moments later with a wet
smack on the quayside. And then again: smack!
It took a while before it dawned on me that the writhing tendrils were of an octopus.
Hopefully, a dead one as one doesn’t really like to see a living animal treated in such a
manner.
Smack.
For a number of reasons I often think about an octopus: a thousand tender arms! It has
something pleasant with its curling embraceable arms that can attached themselves to a
lover and that seem to say come here, stay here with me! Not to mention those
enormous kind eyes, that cloud of ink - he is a writer the octopus, full of blue-black
thoughts that cloud the water and float about densely - just as words can form an
impenetrable barrier to what they mean. That is to say, if and when they do have a
hidden meaning.
Is there always a hidden meaning?
Is what we see the surface, the outside in all its obscurity not everything? Therefore no
protective layer of things truer, keener or more sincere but rather the secret itself?
As Oscar Wilde said the mystery of the world is the visible, not the invisible.
The octopus writes in blue-black ink though all around him is clear and nothing is
readable.
Oh how far gone from this brightly reflected and impenetrable world was the octopus
when it landed on the quay. Gone was its glitter, gone was the water and gone was its
life. Moments later it hung on a line in the sun, its arms neatly draped outwards.
It dried slowly. The ends of its arms became thinner, its colour changed to dull pink and
in the evening when it had become sufficiently dried, it was chopped up, laid across the
grill and served up with a glass of ouzo.
Delicious, grilled octopus at the seaside, one of those smoky suckers stuck on your
tongue, a sip of anisic brew to wash it down... That’s also happiness! Just as much as
seeing an octopus alive in a pool of clearness.
One of the many mysteries of the world is the mystery of incompatibility. How can a
living, gleaming creature from the deep that evokes a sensation of beauty and mystery
for which words are lacking and which you can endlessly admire be the same creature
that you eat?
Does eating at the seaside belong to the fullness of life as much as those thousand
tender arms?
To choose is impossible, we can’t just live only by all that’s bright and glitters.
Marjoleine de Vos