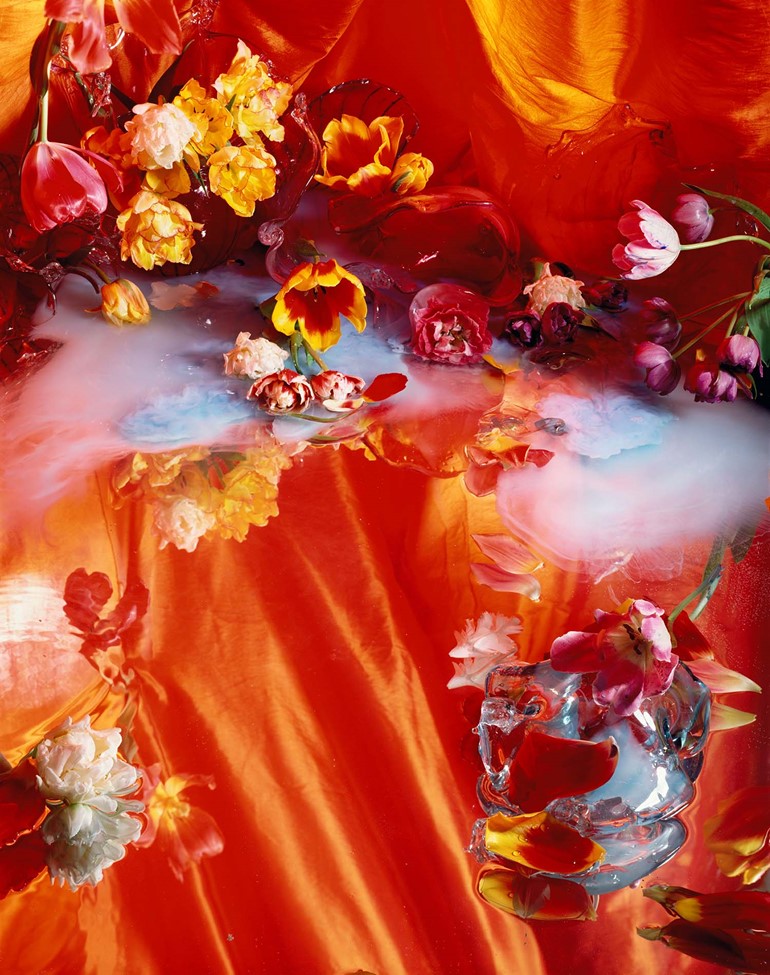 When in 1999 Margriet Smulders visited the exhibition Dutch Still Lifes 1550-1720 in the Rijksmuseum
she was so inspired by what she had seen that she afterwards produced a magnificent series of works
on stilleggent leven, to paraphrase a term of one of the oldest descriptions of that school of still life art. At
the exhibition of Jan van Huysum in the Delftse Prinsenhof in 2006 I, in turn, got gripped by the large,
shining artificial worlds with flowers trapped in indefinite spaces which Margriet presented to a public that
was primarily there for the Jan van Huysum’s real life flower pieces. On that occasion it occurred to me
that there were more differences than similarities between the striking true-to-life arrangements by Van
Huysum and Margriet Smulders’ crystal clear but almost annoyingly inscrutable realms. I considered her
work as rather a welcome contemporary commentary on the Jan van Huysum’s painting than a
continuation of its 17th century tradition.
As can be seen from the first photograph of Jan van Huysum’s work the bouquets are larger and prettier
than they really would have been but one after the other the flowers are presented painstakingly and with
great refinement, imitating a reality in all its details making you forget that the whole has reproduced an
almost impossible truth. With Smulders’ everything appears larger than life, as a reality that is
absolutely improbable. Yet, this reality has been photographed and so must truly have existed at some
time or the other.
Furthermore, Smulders devotes herself to flowers while still life painters of the 17th century
focussed their attention on a much wider range of objects like books, skulls, ink wells, smoking tapers,
old documents, cheeses, shells and so on. Even worse, the percentage of flower still lifes at that time
were considerably less than representations of food stuff. The produce from the land - all that is edible
and freely given by God’s goodness - was a much more popular motif than a vase of flowers.
In the second photograph there are parallels to the drawn with the flower garland by Daniel Seghers. At
first sight this painting shows flowers randomly scattered in small, loose sprigs on a black grey base. On
closer inspection it turns out to be two garlands suspended on an ornamented stone relief of the image
of the Vision of Saint Catharine of Sienna. The relief is in sharp contrast with the flowers, more or less
serving the same purpose as the mirror base in Smulders’ other work. This is after all the background
against which flowers can shine though this also could lead to some confusion. In Seghers’ work the
relief provides an addition to its context. St. Catharine is captured in a vision at the moment she faces a
choice between earthly riches - a crown and jewellery - or a crown of thorns, the symbol of Christ’s
suffering. These options reverberate in the garlands for among the roses there are thistles and thorns. It
is a painting with an evidently religious message. Smulders too, looks further than the realism of truthfully
reflected flowers as can be seen in the poems as well as the expressive titles that refer to Baudelaire
and Shakespeare, Rembrandt, Goya and Maria Callas. Further depth is added by quotations from the
bible - Genesis, the Song of Solomon, Revelation - and Metamorphoses by Ovid. Like Daniel Seghers,
Margriet Smulders addresses other layers in the viewer’s consciousness by means of contextual
associations.
For the 17th century painters as well as Smulders the surprise of a fantom world on a flat surface is
important when faced with the question concerning similarities and differences. In the 17th century
anyone could become amazed by viewing a painting that could conjure a realistic picture out of empty
canvas. Even though by then that there had been painted a lot, yet every time an artist was able to
convincingly depict an interior, a human face or a vaseful of flowers, viewers got intensely surprised. First
there was only a piece of wood, some canvas and a little paint then suddenly a remarkably resembling
image of the true world was created. Nowadays the situation has changed. The current enthusiast knows
all the possibilities of photography, being aware that many artists no longer aim at a make-believe world
on a flat surface, but are in pursuit of their own unique take on reality in a work of art.
The miracle of still life art of the 17th century partly takes place on another level. It was not always easy
to obtain the right pigments so therefore artists sometimes deliberately went for a limited palette. By
appealing to the imagination of the viewer in an inimitable way, a single dab of paint could the one
moment be a damask tablecloth, and the other a candle, a white wall or even the reflection of a window
in a green glass. The painter’s skill to evoke the impression of totally different materials with the same
palette over and over again was something which must constantly amaze people of the 17th century.
Today we are often under the impression that the old masters painted in a very precise manner. On the
contrary, the impact was not based on obsessive attention to detail as this could lead to a boring whole
while a nice and generous daub of paint could mean a wonderful shine on a gleaming object.
Smulders’ work draws you into an uncanny world using an array of colours. The viewer suddenly
understands that she must have put an immense effort into preparing this wild water flora. It applies to

the work of 17th century artists too, especially to their seemingly casually displayed objects on however
carefully placed tables. The flower pieces require close reading as well as some distance. A large
bouquet in a vase was carefully put together with flowers of different seasons because the painter could
wait till the right moment and these flower arrangements consisted entirely of a facade as well. Those
who question how such an enormous bouquet could possibly have fitted into one vase, must admit that
this abundance was not only virtually impossible but also could not actually be brought down to a
plausibly complete whole. Smulders could not have waited either even though the flowers flown in from
all over the world are not as seasonal as before. She must have had a moment when the shutter was
released. In her desire to capture such bountifulness in every work she joins all past painters who always
strove for more than that which was possible at the time.
In some 17th century paintings reality is already a little dislocated. Loose stems lie sometimes next to the
vase by which the artist means to emphasise simultaneously their short-livedness and immortality. A
similar hand is played in Smulders’ works. Her flowers are in a sense sprung loose from daily reality.
Their vulnerability is converted into permanence, into an immutable world that forever remains fragile.
In Smulders’ works the viewer wonders about the flowers that bloom in her indefinite worlds.
They are reflected on a glistening surface, probably of water perhaps a mirror or even both. It is often not
clear where the border lies between the captured scene and its reflection both in the water and the mirror
which results in a superfluous and to the eye disordered plethora. Moreover she succeeds in giving the
viewers the impression of looking through a window, to a world that is behind the mirror just as Alice in
Wonderland, a non-existent world where flowers and plants, frogs and goldfish are larger than reality and
everything seems disconnected from the usual cycle of growth, bloom and decay. The perfectionistic
finish of the work is in sharp contrast with the impermanence of its tangible reality of withering flowers,
leaking water, a darting fish or a frog that vanishes in a dark pool.
The moment of solidification is for Smulders as well as the 17th century painter a tense one.
The artists then were thoroughly aware of this issue. It was not a problem that in a painting a wanderer
would never reach the village in the distance, neither was the knife that had been eternally stuck halfway
through slicing a loaf, but that there were all sorts of other complications concerning frozen movements.
For this reason smiling was more or less a taboo in portraits and a lot of painters did not know how to
deal with rippling water either. During gale-force winds entire ships were shone back on the waves
whereas we know that a flawless reflection is only possible on a windless day and the water is as smooth
as glass.
There are several moments when motion is so totally under control or so completely charged
with emotion that it is no longer of any consequence if actual movement remains imminent. When Judith
lifts the sword to kill Holofernes, we know what is going to happen, and when she does stab the sword
into the victim’s neck and blood starts gushing out - as Caravaggio depicted in his painting - it is not a
problem for us that the blood forever always continues flowing. Another example more closely connected
to the 17th century still life art is Johannes Vermeer’s The Milkmaid. Nobody seems bothered with the
motionlessness of the trickling milk. It gives us the feeling of being part of that particular moment in time.
The margins of what is acceptable when using the frozen moment are explored by Abraham
Mignon who in the toppled vase paints a cat that is focussed on a mousetrap while upsetting a vase full
of flowers and spitting as the water pours from the vase and the mouse is escaping and that for time
immemorial (photo 3). It should have been called the toppling vase.

Such stagnant moments are also present in Smulders’ works, though rather more
related to Vermeer than to Mignon. There are ripples in the water and occasionally a bubble that can
burst at any moment. Her work contains a remarkable tension similar to the work of the 17th century
artists. All in all, Smulders’ stilleggend leven is quietly present, disordered it may be but also worked out
in minute detail and with a barely concealed tension. No matter how long we remain watching, we will
never discover what this wonderful world is about and although we are sure that there will be no
movement at all, there is a permanent tension that can become charged at any moment. In this way the
larger than life world of Margriet Smulders though covering a wall may sometimes remain a mystery to
the viewer.
Wouter Kloek
appendix
Photo 1
- Jan van Huysum, Vase of flowers on a garden ledge, 1730. Oil on panel, 80 by 16 cm. Private
collection (courtesy of Noortman Master Paintings, Amsterdam)
Photo 2
- Daniel Seghers, Garland with Saint Catharine of Siena, 1650. Oil on canvas, 126,5 by 96 cm. Royal
Museum of Fine Arts, Antwerp
- Abraham Mignon, The overturned bouquet, 1670. Oil on canvas 89 by 72 cm Rijksmuseum,
Amsterdam
- Alan Chong, Wouter Kloek, Het Nederlandse stilleven 1550-1720, Amsterdam/Cleveland (Waanders,

Zwolle)1999. On the oldest names for still lifes, in particular Alan Chang’s essay page 11-13; the names
cited are from the household goods of Rembrandt’s inventory, 1656
- For the exhibition, see Sam Segal, Mariël Ellens and Joris Dik, The temptation of Flora, Delft
(Waanders, Zwolle) 2006. A part of the exhibition that was dedicated to Margriet Smulders is reflected
upon in Daniëlle Lokin, Robbert Roos, Get Drunk! Margriet Smulders, Nijmegen, 2006
- In the exhibition Dutch Still Life 1550-1720 the total amount of works that was shown was seventy
eight. Fifteen of them were flower pieces. In more than thirty paintings food is the main subject.