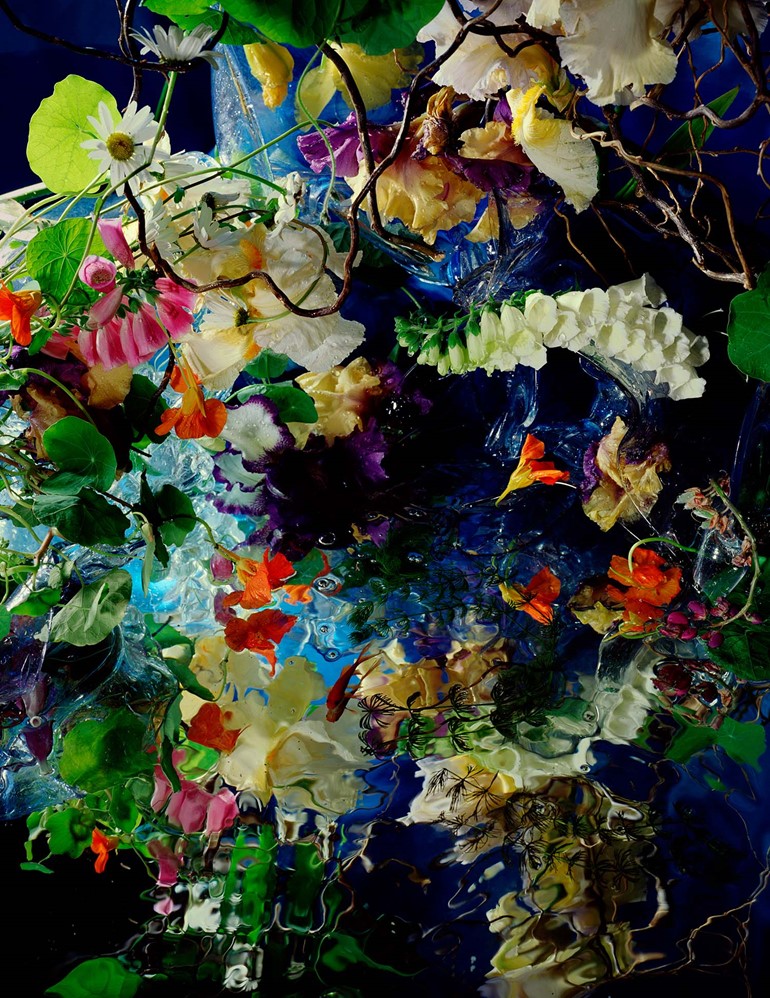 In 2005 Margriet Smulders made a series of four works with the title Amor Vincit Omnia! One of these works - a photo of 1.25 by 11.00 m in size - was commissioned by the Houthoff Buruma lawyer’s office in Amsterdam and meant for the entrance of their new head office on the ring south of Amsterdam.

At first sight the work appears to portray a massive aquarium. The deep blue colour of the water, the fishes and the frog seem to give this impression. However, close
observation reveals that it could not really be an aquarium since so many wonderfully arranged lush flowers could not possibly belong in an aquarium. Also why are there so few fishes visible? What draws our gaze past the flowers into the depths where all sorts of disturbing movements of light and shadow are visible and why do these flowers partially detract our view from the deeper water? There is something mysterious happening here. This is no true portrayal of reality but an illusory truth.

Margriet has given this perfect illusion the charged tittle of Amor Omnia Vincit, that is borrowed from Virgil, Eclogae. Omnia vincit amor, nos cedamus amori.
In other words, love conquers all. Let us all surrender. It might seem appropriate for the reception of lawyer’s office where people go to who need a solution for a problem. During their wait Margriet invites them to abandon the present for a while and to hand over themselves to their innermost thoughts, whether to LOVE, or to EVERYTHING, or even VICTORY.

In the series Amor Vincit Omnia! the sensuous menace of the flower still lifes made in 2000-2001 has given way to that of a certain triumph. These earlier flower compositions were inspired by the sirens, those half goddesses from Greek mythology described by Ovid and Homer. The sirens had the trunk of a bird and the head of a woman and occupied as guards of the sea and water ways small rocky islands. From which they lured many with their melodies in order to first indulge them and then abandon them to the unrelenting power of the waves.

The sirens were definitely not friendly creatures and they are also portrayed in like manner! In the Wtlegginghe (commentary) on Ovid’s Metamorphoses Karel van
Maander calls hun smeeckig gesang - their beseeching cries - the symbols of the wellusten en begeerlijckheden des vleeschs, met hun kittelighe prickelingen,
aenlockende en noodende hen onderworpen te wesen, om schipbreuck tot der eeuwiger verderfnis te doen - lusts and desires of the flesh with their ticklish prickles, luring and subjecting their victims to a shipwreck that results in eternal damnation. They are the antipodes of the Muses who de geneghenheyt onzer sielen - stand for the affection of our souls. On the other hand, the sirens represent our darker moods and moments.

Concerned with our dark moods and moments, or in other words the human psyche, is what Margriet Smulders’ art is all about. In her work there is always a huge amount of ambiguity present, after all behind the ornate beauty lies another deeper truth that is evoked by the Greek gods and half gods of classic literature used in her titles.

Through the use of such titles Margriet’s work conforms to the tradition of Ut Pictura Poesis from the Renaissance; a term originally from Horace’s Ars Poetica who
explicitly compared the poet’s art with the painter’s art and in which he wrote: just as in painting so also in poetry. Therefore painting is either dumb poetry or poetry is articulate art. The 15th and 16th century historians used similar comparisons to elucidate the
equality of painting and poetry in an attempt to put the painter’s art on a higher plane as after all poetry just like painting belongs to the liberal arts and therefore demands an intellectual approach.

It is rather amusing that Renaissance painters mostly seem to have been occupied with tales from the classics such as infidelity, drunkenness and seduction.
Colourful gods like Bacchus and Silenus, Mars and Venus, the unfaithful Zeus and myriad other gods and goddesses who were time and again subjects for painting, prints and sketches in which the scenes were probably popular precisely due to the obvious similarities between godlike and human behaviour. This quality of a mirror held up to human behaviour had already been identified by antiquity in their gods.

Of a completely different order were the psycho manias such as Mantegna’s Allegory of Virtue and Vice from the 1490’s and painted by the studio Isabelle d’Este in
Mantua now hanging in the Louvre in which the gods were presented as the personifications of virtue and vice. Writers like Cicero of De Natura Deorum fame played
an important role here. After all, he had described the Greek deities, giving them a position in the cosmos in relation to good and evil. It was Cicero who made us aware that the gods were merely personifications of the forces of nature.

In Mantegna’s painting Minerva Wisdom together with Diana and Chastity banish the goddess Venus who is responsible for all vice from the delightful garden. In it
Venus is surrounded by Avarice, Ingratitude, Ignorance Inertia and other vices.
Furthermore Bandinelli’s famous composition of the strive between Logic and Libido has a highly moralising and intellectual tone.

As in these Renaissance examples, it is such conflicts that form the underlying formulae in Margriet Smulders’ work.  Her art has the character of the psychomachiae. She is a psychologist herself, who fortunately prefers not to banish the sensuousness of Venus and Bacchus. Rather she portrays Venus as the ever victorious goddess: Amor vincit Omnia.